The EU region has always been highly dependent on energy imports, with 45% of its natural gas imported from Russia in 2021. Since the Russian-Ukrainian War, the large-scale outage of Russian natural gas has caused the energy crisis in Europe for months. Taking Germany as an example, the wholesale electricity price in August rose to more than 400 euros per MWh, is over five times that of the same period in 2021. While electricity prices in Europe have fallen back in the past two months, the energy situation next year remains severe.

How could Europe save itself from the situation of being held back by Russian natural gas under such pressure? 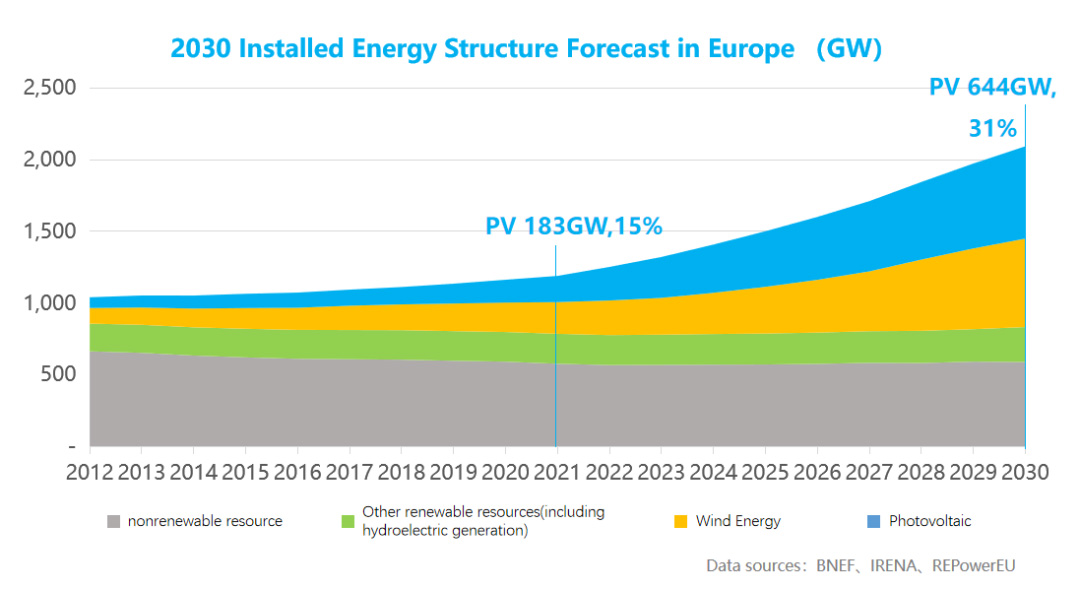 In May, the EU published the “RepowerEU” energy program. By increasing renewable energy and expanding the import of liquefied natural gas, the EU will reduce its dependence on Russian energy and speed up the shift to green energy. Aiming at the development and utilization of photovoltaic energy, EU has specially formulated EU Solar Energy Strategy. It is planned that the installed grid-connected PV capacity will reach 320GW by 2025 and 600GW by 2030, which means that during 2022-2030, the EU will increase the PV installation capacity of nearly 50GW annually. By 2030, combined with other non-EU countries, the photovoltaic capacity of Europe is expected nearly 650GW, accounting for 31% of overall energy structure.

How does each EU country plan to achieve the 2030 Solar Energy Strategy target?

Europe is geographically far away from the equator. Except for a few southern European countries such as Spain and Portugal, other countries are not rich in sunlight resources. However, with the determination of the EU to achieve the objectives of “the Paris Agreement”, many countries have developed ambitious photovoltaic programs. 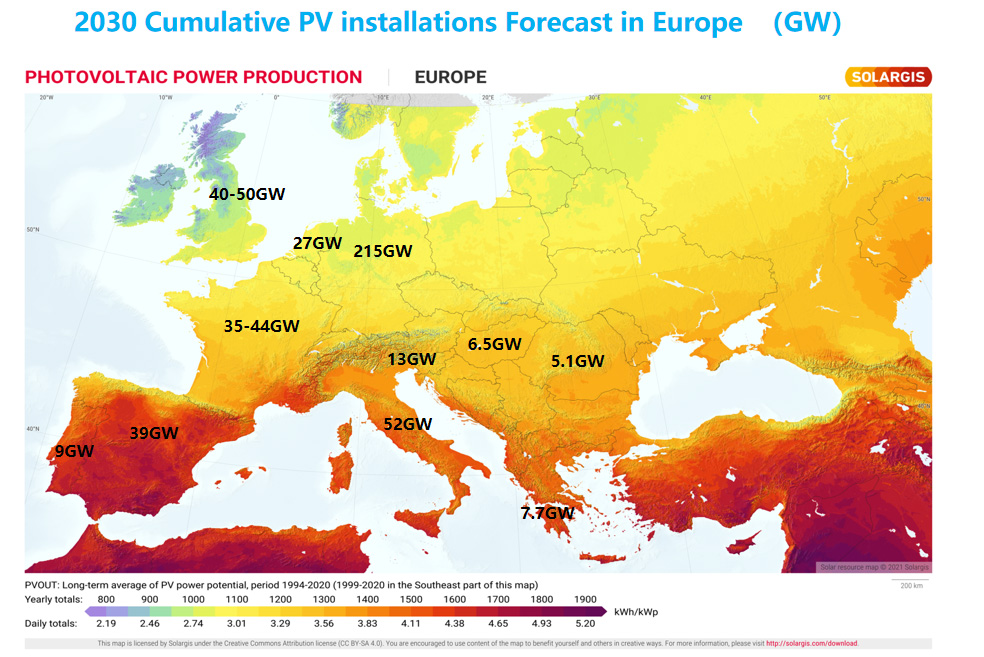 Germany is the largest economy entity in the EU. In this round of photovoltaic boom, Germany has issued a plan called “Easter Package”, with the goal of achieving 215GW of PV installed capacity by 2030, equivalent to 17GW increasing annual average from 2022 to 2030. For this reason, Germany has published a series of new public project tender plans, including increasing household photovoltaic power subsidies, and issuing policies that require solar coverage of private residence to exceed 50% by 2030.

Spain is the second largest popular photovoltaic market in Europe. It is located in southern Europe, with superior geographical conditions, with an average daily light duration of more than 4 hours throughout the year, which is higher than most countries in Europe. If a photovoltaic system of the same size was installed in Spain and Germany, Spain could produce an average of 50% more electricity than Germany. Based on these unique advantages, the Spanish government has launched a series of policies to support the development of the photovoltaic industry, such as granting exemption licenses for building photovoltaic projects and comprehensively supporting the development of PV self-consumption projects. Over the past few years, the photovoltaic market in Spain has flourished, and its ground power generation has been basically free of subsidies, and has become one of the most mature PPA markets in the world.

In addition to the above countries, the photovoltaic industry in other countries is developing rapidly. Last year, the new photovoltaic capacity in Europe was around 31GW, while more than 75GW of photovoltaic modules were imported from China from January to October, according to figures released by the General Administration of Customs. Such huge increments predict the prospect of European photovoltaic market in the future, and also bring huge opportunities for Chinese photovoltaic enterprises.

What is AKCOME’s layout in the European market in 2023?

AKCOME has always adhered to the internationalization strategy. According to the latest Tier1 List released by BNEF, AKCOME was listed in it again, which proves AKCOME’s strength as a global photovoltaic enterprise. In 2023, AKCOME will continue to expand overseas sales business, focusing on developing and distributing European markets, centering on the main markets led by Germany, France and Spain, gradually promoting the fast-growing of high-quality markets such as Netherland and Poland to provide efficient modules and high-quality service for European customers.