How will the Asia-Pacific PV Market Develop in 2023

The Asia-Pacific region accounts for a pivotal position in the global PV market, with not only being the centre of the world’s PV industry chain, but also the global regional championship in terms of PV installed capacity for many years.

Under the tide of global energy revolution, old Asia-Pacific PV markets such as China, India, Australia and Japan are performing actively, while emerging markets such as Pakistan and Southeast Asia are also gradually emerging. It is expected that the demand for new PV in Asia-Pacific region will reach a new peak of 165GW in 2023, generating a total of 8 to 10 GW-level PV markets.

Today we will talk about the PV market of each major country in the Asia-Pacific region.

Following the “carbon peak and carbon neutral” initiative in 2020, China has seen an acceleration in the development of renewable energy. According to the 14th Five-Year Plan issued by 31 provinces, municipalities and autonomous regions, the total installed PV capacity in China will reach 624GW by the end of 2025, minus the completed amount in the third quarter of 2022. During the period from October 2022 to 2025, the remaining PV indicators of various provinces and cities in China will be 433GW, all of which will be spread to 2023-2025, and the annual newly increased PV installed capacity of China will rise to the unprecedented 130GW.

In 2023, a booming centralized and distributed PV market will emerge in China. On the one hand, the distributed PV market continues to advance deeply. On the other hand, the national wind and light base project policy, superimposed on the PV products price reduction favorable, the ground power station market is expected to usher in a large-scale start next year. 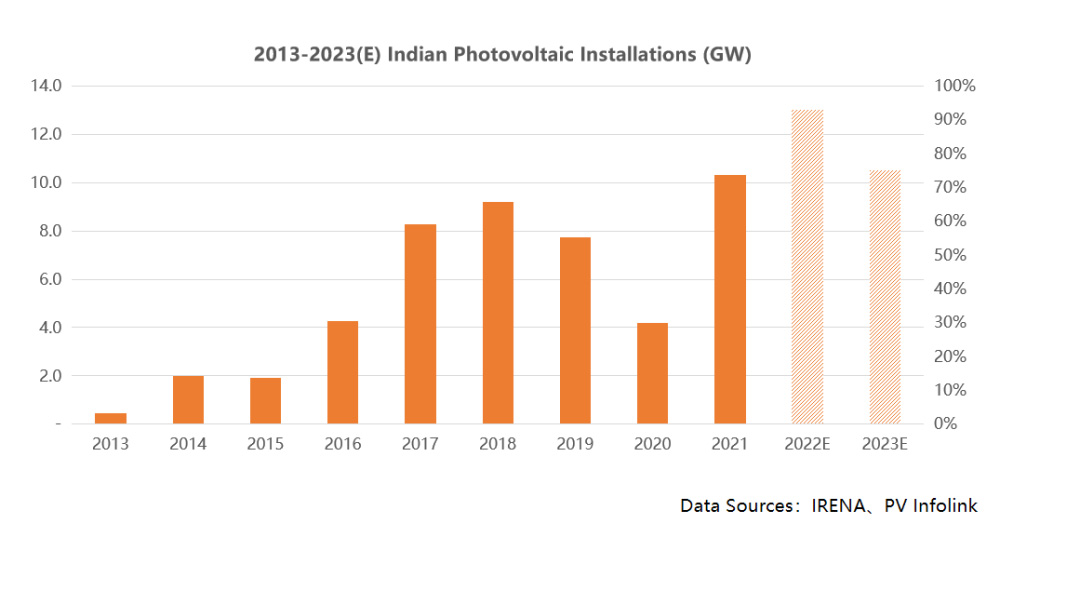 Currently, India is caught in the dilemma of meeting its own installed demand and supporting indigenous manufacturing. The government has introduced the Production Linked Incentive (PLI) scheme to support localized production capacity, and has imposed a number of thresholds on PV products, including BCD tariff and LMM list. However, the local production capacity is less than expected, which makes it difficult to achieve the installed capacity target. India’s official announcement in October this year to terminate anti-dumping investigations against China, Southeast Asia and other places did not materially affect high BCD tariff barriers. Therefore, according to the PV Infolink forecast, India’s new PV installation will only be 10.5-12GW in 2023 based on the current policy, but if there is any subsequent relaxation in the policy, the installed demand will be raised significantly.

Over the past 10 years (except for 2021), Japan has maintained an annual PV installation of more than 6GW. In 2021, Japan has a cumulative PV installation of about 74 GW, with a PV power generation share of about 8%. According to the sixth edition of the Energy Strategic Plan released last year, the share of PV power generation in Japan will increase to 14%-16% by 2030, which means that the scale of PV installation in Japan is expected to double between 2022 and 2030, depending on the total power consumption without regression. In 2022, Japan’s renewable energy policy changed from FIT to FIP, PV power generation bidding according to electricity market rules, and government provided premium subsidies. The successful implementation of FIP policy represents that the PV industry in Japan has basically been separated from large-scale subsidies and gradually moved to market-oriented. 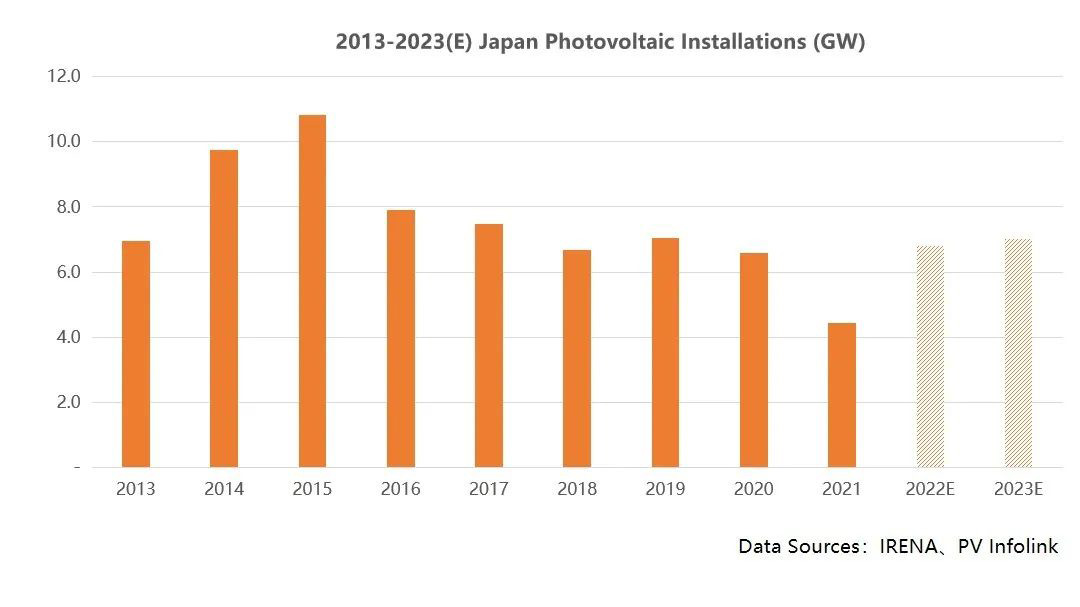 Furthermore, Japan has also frequently issued support policies for PV projects in special scenarios this year, such as subsidies for PV projects on farmland, reservoirs and waste treatment plants, and new single-family houses in Tokyo from April 2025 will be equipped with PV panels, among other initiatives, all of which reflect the determination of the Japanese government to realize the goal of 2030. With an outlook to 2023, the new PV installed capacity in Japan is expected to be around 6-7GW.

Australia is a country with abundant light resources and a high level of private PV penetration. By 2021, Australia’s cumulative PV installed capacity exceeded 25GW, of which small projects below 100kW accounted for more than 74%, making Australia the largest household PV market in the world. ln 2021, Australia’s share of renewable energy generation was 29%, and this year, the federal government has set an ambitious target of increasing that share to 82% by 2030, which foresees Australia's renewable energy sector is expected to double in size between 2023 and 2030. 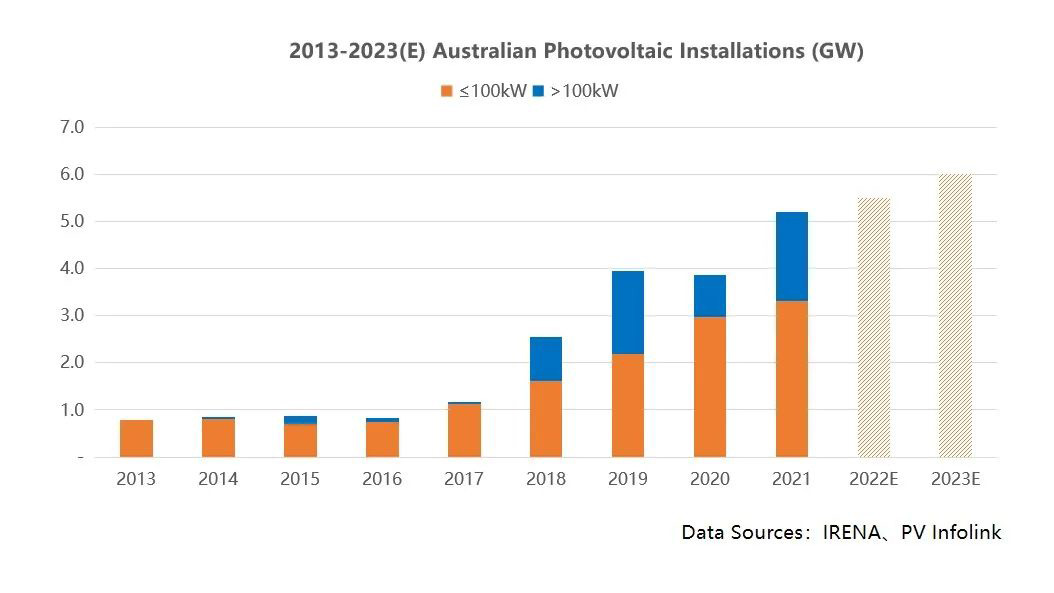 In addition to the traditional household PV market, Australia’s ground-based PV project market is also emerging. In December, the federal government announced that it would set up a capacity investment plan for energy installations, the Capacity Investment Scheme (CIS), defining the determination of Australia’s grid to gradually transition to renewable energy. More details of the plan will be announced in the coming months and it will be auctioned for the first time in 2023. With an outlook to 2023, it is expected that Australia’s new PV demand will be around 6GW.

According to the latest edition of Basic Plan for Electricity Supply and Demand (2020-2034) in Korea, the proportion of renewable energy power generation in Korea in 2034 was 41.9%, with installed renewable energy capacity increasing from 20GW in 2021 to 77.6GW in 2034, mainly driven by wind energy and solar energy. With a view to boosting the domestic PV industry, Korea’s Ministry of Trade, Industry and Energy (MOTIE) stated in September this year that it had eased the previous entry threshold of 1MW in the PPA market to 300kW, with the intention of fully facilitating domestic power consumers to buy electricity from renewable energy producers through power purchase agreements (PPA). The FIT system is introduced for projects below 100kW to encourage the development of small-scale projects. 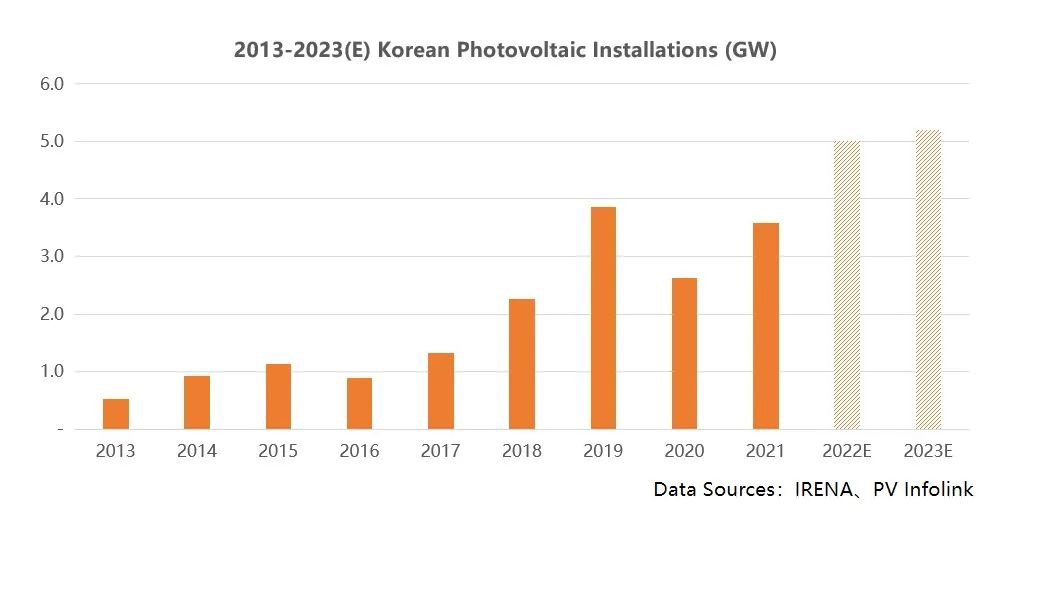 In addition, Korea is currently implementing an RPS scheme, which requires 22 large power companies to steadily increase their share of renewable energy in total power generation over the period 2012 and 2024. The forecast is for Korea’s installed capacity to exceed 5GW in 2023.

In addition to the 5GW+ countries mentioned above, the Asia Pacific region is expected to produce several GW-level PV markets in 2023, including Pakistan (2.5-4GW), China (Taiwan) (2-3GW), Thailand (1GW), several countries such as Malaysia, the Philippines and Vietnam also have the capability to hit 1GW.

In the Asia-Pacific region, Akcome mainly focuses on the domestic market. For both centralized and distributed PV scenarios we have launched corresponding products, which are well matched to the needs of different terminal scenarios. At the same time, Akcome is also actively promoting the construction of strategic cooperative relationship with central state-owned enterprises, and has already made a great breakthrough in the bidding projects of central state-owned enterprises. Consequently, we are confident that our plan for next year is to advance on both centralized and distributed power projects, and we are confident of achieving further success in the domestic market. In the Asia Pacific markets such as Australia, Japan, Singapore, Malaysia and Pakistan, we are committed to bringing products and quality services that better meet the local needs of our customers in the niche markets by establishing local service teams.